Lydd - Yesterday, in bright spring sunshine but with a keen wind out of the east, I paid my first visit of the year to the Lydd heronry to check on the number of occupied nests. The majority of nests are in the grounds of the Grange on the corner of Dennes Lane, beneath the towering presence of the `Cathedral of the Marsh`, All Saints Church, Lydd and a few more on adjacent properties.
Having made contact with the owner of the Grange, who is proud of `his` herons, we had a wander through the scattered woodland where Barney was most interested in the vast array of Badger holes and diggings. Apparently, these setts support up to thirty animals, and I`m not surprised judging by the extent of the earth workings. Just next door the Badgers can range across sheep pasture and further scattered woodland towards the Glebe, so perfect feeding habitat, while access into the formal garden of the Grange is restricted by an electric fence to prevent it resembling `the Somme`.
However, back to the herons. While the majority nest in evergreen Holm Oaks and Scot`s Pines there are three pairs separate from the main body of the colony nesting in bare Oaks. In total I counted 16 occupied nests, but fortunately due to the kindness of one of the church wardens I have access to the church tower, enabling a more accurate count.
I could find no evidence of any Little Egrets from the ground, but they have been reported; maybe I`ll have more luck from atop the tower. It is also worthwhile mentioning at this juncture that there is a large and vocal Rook population with scores of nests scattered across the tree tops, and a constant cacophony from the rookery.
When I took over from the former heron counter, Ted Carpenter, he commented on the wide variety of trees in what is a mini arboretum, and I promised to do a proper survey at some stage. As yet I haven't got round to doing one, but even a quick glance at the woodland and grounds revealed some impressive specimens, particularly of Holm Oaks, while a Magnolia tree in the formal garden also looked spectacular in the sparkling sunlight. 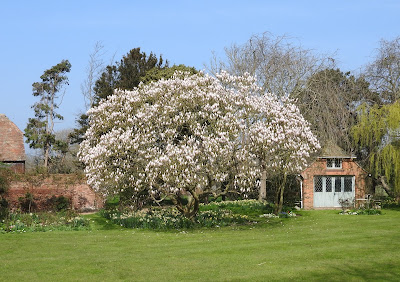 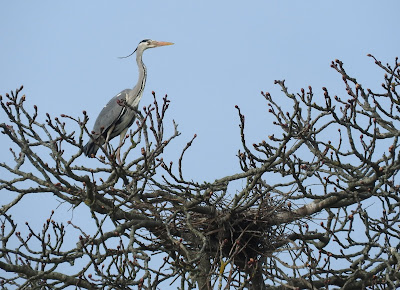 
A Brief History of Lydd Heronries
As far as I can ascertain Grey Herons have nested at the Grange/Glebe site since 1962 with a peak of 28 nests in 2001 and an average of about 20 nests since, with Little Egrets first reported in 2009. Prior to this period there were scattered breeding records from Westbroke, Lydd, Snargate in the 1950`s and from Walland Marsh, Dengemarsh and the Oppen Pits in the early part of the 20th Century.
However, the heron`s association with Lydd goes way back into the mists of time. According to the Account Book of the Chamberlains of Lydd (1428) the sending of young heronshaws to officials of the Confederation of Cinque Ports was payment for favours rendered, as heron flesh was held in high regard and featured on the menu at many a great feast.
The site of this ancient heronry was situated on what is today part of the Lydd Army Ranges where a Holly wood was planted on the shingle wastes during the 12th Century, the hardwood timber being used in the construction of sea defences, quays and the like. By the 15th Century the mature wood was known as the Holmstone and supported a substantial heronry, a great asset to the Corporation of Lydd who obtained young birds for the table just prior to fledging when at their fattest. The Holmstone heronry was also used for sporting purposes by falconers and archers using longbows to bring down adult birds.
As the gun eventually replaced the longbow and falcon, heron numbers declined rapidly, along with the felling of trees during the Napoleonic period to prevent smuggling. Human pressure finally sounded the death knell for the Holmstone heronry and by 1909 Dr Norman Ticehurst writing in the Birds of Kent decreed that the heron had ceased to breed at this site.
Thankfully, in these slightly more enlightened times the Lydd town centre heronry looks safe from molestation, although being only a small colony its presence remains tenuous. For those birdwatchers wishing to get cracking close views and photographs of herons in the nest the church tower is open to the public on Bank Holiday Monday 1st May. RSPB have a presence atop the tower (with myself on the morning shift) and it really is a worthwhile experience as by then the youngsters will be clambering about the tree tops.
I would like to thank Ted Carpenter for providing much of the information on the Holmstone and Grange heronries for this summary.

Saturday - dry, sunny, ne 5 - At Lade pits this morning two Swallows pressing north over the shingle were the only migrants of note. Whilst cutting Barney`s coat in the garden a Firecrest was heard in the fir trees before eventually coming down to drink in the pond. Others were reported from across the Dungeness peninsula today, while the two Iceland Gulls were still at the Patch as the first Arctic Skua of the spring passed up-Channel (SO).
This afternoon we called in the bird reserve on the way back from the allotment. On New Diggings three Black-necked and one Slavonian Grebe and five Goldeneyes, the Ring-necked Duck was still on Cook`s Pool and more Goldeneyes were on Burrowes, plus Dunlin and Redshank.