Sunday - warm, dry, sunny, s 2 - Despite the Met Office forecast for rain, today turned out to be another cracker in this corner of England. The Lade WeBS count was notable for 60 Shovelers and the continuing presence of a Slavonian Grebe. In Folkestone singing Blackcaps and Chiffchaffs were noted at two locations including the Lower Leas Coastal Park.
Monday - Dungeness - warm, dry, sunny, n 2 - Another fine spring day, although the wind had swung around to the north. An early morning tour of the peninsula delivered our first Wheatear and Black Redstart of the year at the lifeboat station and lighthouse garden respectively. Also in the garden several Chiffchaffs, Chaffinches, Blackbirds, Dunnocks and Great Tits. Whilst chatting to the regulars in the seawatching hide a Red-throated Diver, six Common Scoters and a Bonxie flew through, plus Rock Pipit, 10 Redwings and two Med Gulls over. Meadow Pipit, Pied Wagtail, Skylark and Stock Dove all showed signs of breeding along the foreshore. 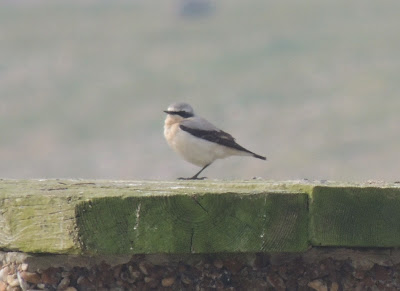 Lade - No change from yesterday on the pits. However, around midday the Herring Gulls along the coast went into meltdown as a Red Kite headed north towards Greatstone.
Posted by Paul Trodd at 07:19