Lade - 0800hrs - cold, foggy, light airs - The murk was slow to clear this morning from the local patch where a Sandwich Tern flying over calling was the first of the spring.
Park Wood - 1230hrs - warm, dry, sunny - Having picked up two of our regulars, Ray and Stuart, from Ashford station we headed for the woods and a spot of lunch to start a three day Birdwatching Break. Despite the time of day there was still plenty of bird song on offer and we soon rattled up Chiffchaff, Nuthatch, Treecreeper, Coal and Long-tailed Tits and Goldcrest, plus Buzzard and Sparrowhawk overhead from the car park. But it was the woodland flowers that stole the show with great swathes of Wood Anemones and clumps of Primroses carpeting the woodland floor in the bright sunshine, making for a wonderful spirit-lifting spectacle along with a number of Brimstone and Peacock butterflies. 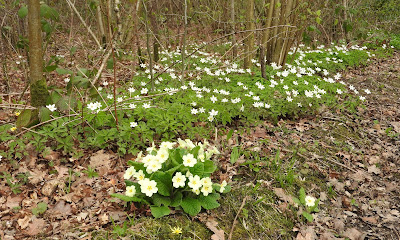 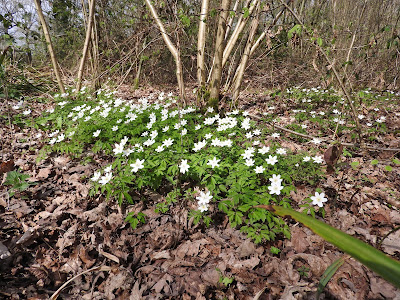 Kenardington - We then moved down to the Marsh and one of my favourite spots beside the Royal Military Canal. I say canal, but its been so dry this past winter that the water level was very low and it now resembles a muddy ditch, although that didn't seem to deter a Kingfisher that zipped to and fro.
The usual range of common wayside birds were noted here including more singing Chiffchaffs, a Blackcap, Bullfinch, several Buzzards and a Kestrel. The Marsh Frogs were in good voice and several Peacock butterflies floated by.
Scotney - Down on the coast it was much cooler due to a brisk wind coming off the Channel. On the front pits Redshank, Ringed Plover and Oystercatcher were all logged, plus Green Sandpiper and Avocets out back. The Black-headed Gull colony was under starters orders along with several Med Gulls. Other birds of note included Shelducks, Dabchick, Little Egret, Skylark, Corn Bunting and  Marsh Harrier. 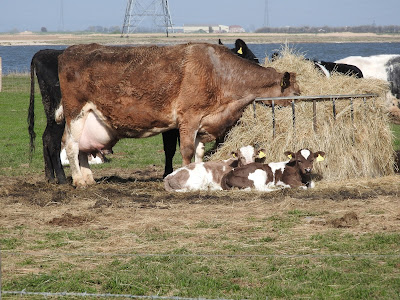 On the way back to Plovers we called in at the Lydd Army camp where a Little Owl showed by the watch tower. We were less successful at Boulderwall pools where neither Garganey or Ring-necked Duck could be located.
Posted by Paul Trodd at 12:20