Lade - warm, dry, sunny, sw 2 - Once the early morning cloud lifted it turned into a fine spring day with the temperature reaching 16C by early afternoon. Scanning the Desert for a Wheatear again drew a blank, but two singing Skylarks and Mipit was ample compensation. We walked Mockmill where the first singing Linnets of the season were noted, plus several Reed Bunting and a pair of Stonechats. A Marsh Harrier worked the fields towards the airport passing a hovering Kestrel. 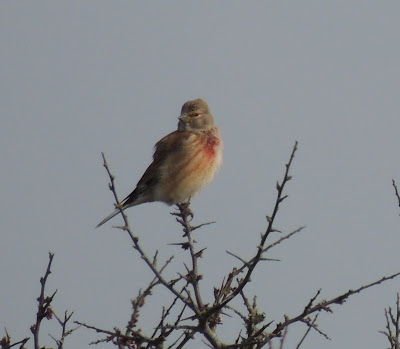 On south lake singles of Slavonian Grebe and Great White Egret were still present, plus two adult Mediterranean Gulls amongst the Herring, Common and Black-headed Gulls. As the tide came in a flight of 23 Curlews flew over to roost on the shingle.
On a falling tide I spent some time counting the beach waders from the Tavern and Varne viewpoints as follows: Oystercatcher 620, Ringed Plover 12, Grey Plover 23 (Littlestone), Knot 15, Sanderling 230, Dunlin 280, Bar-tailed Godwit 21, Curlew 410, Turnstone 46 (Littlestone), Redshank 4.
Littlestone - A walk along the foreshore and back through the golf links this afternoon delivered several singing Skylarks, Mipits, Reed Buntings and a Rock Pipit near the car park at the St Mary`s Bay end.
Posted by Paul Trodd at 09:13