Dungeness - 0545-0745hrs - cold, cloudy, sse 5 - The lure of a southerly airflow attracted a hide full of regulars this morning for what proved to be a worthwhile session. Plenty of Gannets were forced close to shore, some feeding, others passing up-Channel, along with the best showing this spring so far of Sandwich Terns and Common Scoters with at least 100 of each. Fulmars are a given here on a southerly blow and 30 plus sheared past mostly heading west and some inside the buoy. About ten parties of Brents plodded up-Channel during the watch comprising around 150 birds along with 20 Red-throated Divers, six Shovelers and 31 Pintails. Also noted several Mediterranean Gulls, plenty of Kittiwakes, Cormorants and Great Crested Grebes, a Bonxie and three Slavonian Grebes on the sea. 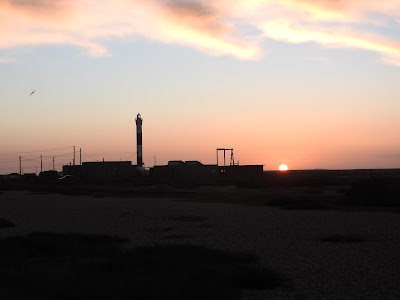 After breakfast we headed down the bird reserve for a circuit of Dengemarsh - just as the rain started and the wind picked up! Unsurprisingly, not a great deal was noted apart from the usual plastic fantastic wildfowl, including Egyptian Geese on the fields, Hooded Merganser on Hookers and Ring-necked Duck on Cook`s Pool. The hayfields were bereft of birds apart from a flock of Magpies and Crows, which doesn't bode well for the Lapwings this spring. Raven, two Bearded Tits, a few Linnets and Reed Buntings and a Marsh Harrier also noted, and for the first time this year there was no sign of any Great White Egrets. The highlight on Burrowes was a stunning summer plumage Black-necked Grebe and six Goldeneyes. 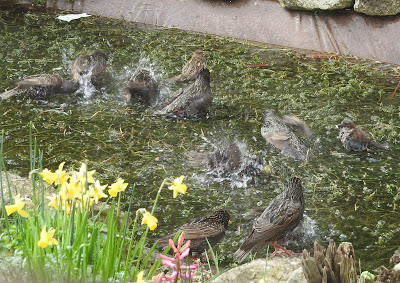 Lade - Our local Starlings and House Sparrows provided great entertainment this afternoon bathing in the pond where they were joined briefly by a Chiffchaff coming down to drink. A Sparrowhawk nipped through scattering the flock, the first I`ve seen for a while.
Posted by Paul Trodd at 10:56