Lade - Misty, mild, sw 2 - The plan this morning was to head down to Dungeness, but when I rolled out of bed at 0600hrs the first thing I heard was the foghorn blaring away; the entire peninsula was wreathed in a sea fret. Anyhow, being the eternal optimist, and thinking it would soon clear I did go, if only to walk Barney around a fog-bound Trapping Area which was virtually birdless apart from a few tits, finches, Mipits and a Chiffchaff.
Plan B was then initiated, so it was back to the local patch where you could just about see the far side of the lake, until another bank of fog rolled in. Infact the murk didn't clear from Lade until late morning, while at nearby Dungeness the fret lingered all day judging from the booming fog horn. 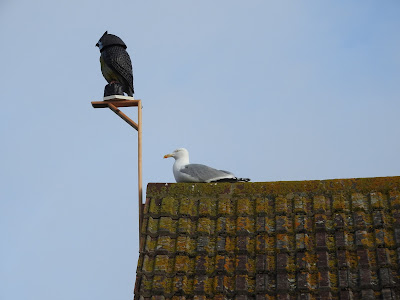 "You can`t fool me that easily"

Its that time of year again when the Herring Gulls are getting ready to breed, and all along this part of the coast you can hear them day and night clamouring away, shitting everywhere and looking for a suitable roof to nest on. I`ve got something of love hate relationship with these birds as while I`m not too keen on being crapped on, they are great at giving a heads up on passing birds of prey - two Red Kites so far this spring.
However, many folk hereabouts (including us) have taken precautions to deter the gulls (wire mesh and spikes around chimney stacks and roof ridges are essential) or be terrorised all summer long. Unfortunately our local chippie owner (who doesn't live on site) continues to encourage the damn things by chucking out fish waste onto a nearby flat roof, despite being asked to desist.
Another form of deterrent being tried locally is to fit a plastic owl with a rotating head in a prominent position, but as you can see from the above picture its going to take a little bit more than that to fool a wise old Herring Gull!
Posted by Paul Trodd at 12:00