Dungeness - 0630hrs - mild, cloudy, light airs - Walked down to the Patch first where a half-hearted `boil` had attracted a handful of terns and gulls, including one each of Black Tern and Little Gull. Out on the mill-pond-like sea a scattering of Gannets, Sandwich Terns and an Arctic Skua. The scrub around West Beach and the Old Light produced 10 Willow Warblers and 2 Tree Sparrows, while at the Obs a couple of Tripits went over calling and a Pied Flycatcher perched briefly on overhead wires. Also noted Greater pecker, Sparrowhawk and 5 Yellow Wags.
Lade - Last nights catch in the garden included a new moth, Shaded Broad-bar; a common enough Geometrid, but one that until now had not made its way into the trap. A Spotted Redshank flew over the cottage early on calling.
ARC - 1500hrs - In Hanson it was good to have a natter with Somerset Pete, back on the Marsh for a short visit from the West Country. Plenty of waders on the shingle ridges to check through. Amongst 500 Goldies and Lapwings were 40 Knots, 15 Dunlins, 5 Blackwits, 3 Ruff and 2 Common Sands. Also, 4 Black Terns, 2 Little Gulls and the regular Goosander. Over the road the Cattle Egret was at Boulderwall, the GWEgret at Dengemarsh and there was a late report of a Red-necked Grebe. 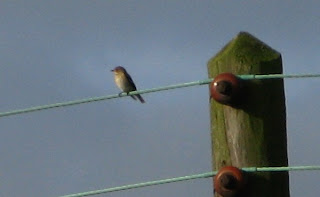 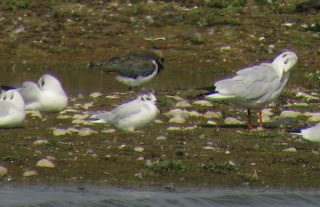