Lade -  0600hrs - mild, cloudy, sw 3 - Last nights forecasted rain failed to materialise, so the day started dry and still with a good few moths in the garden trap, although nothing of any real quality; Flame Shoulder, White-point, Spectacle and the like. Did the monthly WeBS count on the pits with 356 Pochard being the most numerous duck. Also, Greenshank, 2 each of Common and Green Sands, 2 Sparrowhawks, several Green Woodpeckers and a party of Lottis (scarce here). 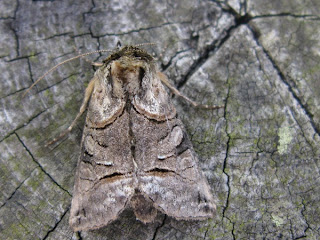 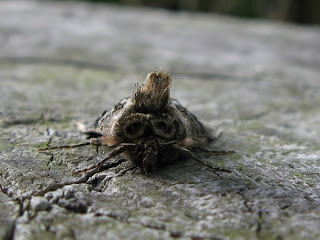 Spectacle, Plovers
ARC - 1530hrs The jungle drums were beating this afternoon with news of a freshly arrived White-rumped Sandpiper on ARC, viewable from Hanson hide. By the time I arrived it had flown to the furthest island, so I didn't have the close views of earlier; however, for half an hour it was accompanied by a small Dunlin. The WRS was slightly shorter, but dumpier, with long primaries overlapping the tail and a straight, head-length bill, curved at the tip, giving it a distinctive enough jizz (it also appeared to have a noticeable limp). Plumage wise it looked very grey overall with a pale belly and supercilium. The plain-grey back had a few black centred scapulars, so I assumed it was a moulting adult, but as I say the views were a bit distant, although the light was superb. Eventually, it was flushed along with everything else and had not returned by the time I left at 1700hrs. I checked the south end without success but I guess it hadnt gone far and would soon return.
Found by 2 visiting birdwatchers and confirmed by Weekend Birder this is only the 2nd since I`ve lived here; the last one being a juv in Oct 2006 on Dengemarsh. If `accepted` it will be the 3rd Dungeness record. White-rumped Sandpiper is an annual vagrant to these shores in small numbers from North America, the majority occurring in July-October.
Posted by Paul Trodd at 06:42