Dungeness - 0700hrs - mild, cloudy, drizzle, sw2 - A circuit around the point produced a few grounded migrants in the shape of Willow Warblers, Wheatears and Yellow Wagtails, while offshore a feeding flock comprised 100 plus Gannets and terns. Strolled down to the Obs where a few common migrants had been trapped, had a cursory look for the Wryneck and headed home to check the moth trap. Half way through the phone rang and it was a case of back to the Obs a bit sharpish...
Bonelli`s Warbler, Phylloscopus bonelli - A first autumn Bonelli`s Warbler was netted in the Trapping Area at around 0830hrs and after processing attracted a tidy crowd of locals outside the Obs. Even in the hand it was a smart little phyllosc, similar in shape and structure to Willow Warbler but with a Wood Warbler `feel` to it due to the silky white underparts and yellowish green edgings to the wings and tail feathers. The face was rather plain. This was the first DBO record since 1989 and a British tick for me. Apparently, most immature Bonelli`s cannot be split by in-hand biometrics, but it was assumed to be of the western race P. bonelli (although that could change if it calls) which breeds in northern France. The bird was released into the moat. 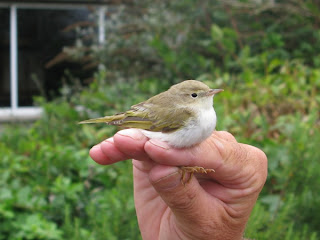 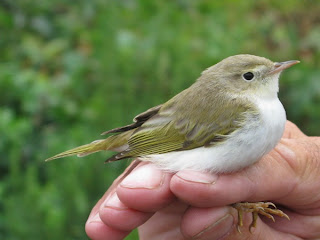 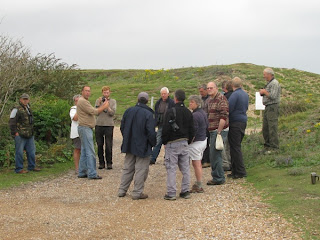 ARC - 1200hrs - A quick scan from Hanson hide revealed 410 Goldies, 2 Ruff, 8 Dunlin (one very big individual), 2 LRPs and a Common Sand.
Dungeness - 1700hrs A few hopeful twitchers staking out the Bonelli`s Warbler around the Heligoland trap in the moat this afternoon. Apparently, it was last seen at 1315hrs and has been confirmed as a bird of the Western race on call. The Wryneck proved as elusive as ever in West Beach scrub and the Glaucous Gull was by the boats.
Posted by Paul Trodd at 03:18