Lade - 0600hrs - mild, sunny, w2 - More Willow Warblers in the garden this morning and another disappointing collection of moths in the trap, although Sallow Kitten was new for the year.
Dungeness - 0900hrs Following the excitement of yesterday it was back to more normal fare today. The Patch delivered a motley collection of gulls, 30 Common Terns, 2 Little Gulls, 2 Black Terns and a Kittiwake. Offshore, a few Gannets and single Arctic Skua and Bonxie. "Shearwater", shouted someone, which turned out to be a `shearing` Gannet, followed by, "Bonxie!"  (juv Herring Gull).
ARC/Boulderwall - Two adult Blackwits and the Goosander at south end, along with 2 Little Gulls a Wigeon and loads of moulting ducks and gulls. News of a Cattle Egret from Screen hide soon spread amongst the locals. Apparently it flew over the Lydd Road and dropped down amongst stock towards Cockles Bridge where it morphed into a Little Egret. Whilst at boulderwall the leucistic Grey Heron was mistaken for the GWEgret
A duff day, full of duff gen really... 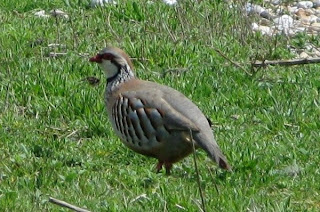 Frenchman - bird of the day
Posted by Paul Trodd at 12:24