Wagtails, Wheatears and a Wryneck

Dungeness - 0600hrs - mild, cloudy, sw2 - An early morning jaunt around the point resulted in a couple of surprise encounters. The walk down to the Patch delivered, 10 Wheatears, 10 Pied and 1 Grey Wagtails, single Black Redstart and 10 Linnets. A Peregrine powered through and 2 Ravens headed towards the switch house `cronking` loudly. Nothing much happening at the Patch apart from 50 odd Gannets feeding off-shore. Between the Old Light and the moat at least 50 grounded Yellow Wags and 10 more Wheatears.
Whilst chatting in the Obs garden a large raptor was noted slumped on the shingle over towards Lloyds Tower. Didnt get much on it apart from it being a big, pale falcon, probably a Saker type...
However, back near the Old Light a Wryneck had been located in a patch of gorse. Only had brief views before it plunged back into cover.
Returned to the point this afternoon and the Wryneck had retired into West Beach gorse scrub; not surprising as people everywhere on this warm afternoon. A Peregrine over, several Wheatears on the beach, plus a few Gannets and terns off the boardwalk was about all I could muster. 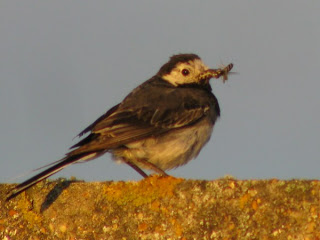 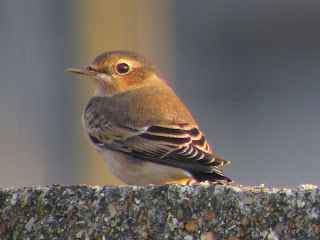