Moths, Mackerel and a Whinchat

Dungeness - 0600hrs - mild, cloudy, showery, ssw2 -  A poor night in the garden trap, as elsewhere across the peninsula, apart from Boulderwall which scored with a rare (in these parts at least) Brussels Lace (Oh, what a romantic name...) which feeds on lichen (well, perhaps not..).
A wander down to the Patch produced 50 Common and one Arctic Terns, 2 Kitts and a juv Yellow-legged Gull on the beach, plus a whole load of Gannets, terns, gulls and my first 2 Arctic Skuas of the season feeding around a shoal of fish; probably Mackerel judging by the amount being landed by the beach casters. A juv Cuckoo briefly paused in the lighthouse garden and a Marsh Harrier that attempted a sea crossing turned back over the power station where he was greeted with derision by the Herring Gulls.  On the power station fence by the Obs a flock of ten `chats` comprised, 7 Wheatears, 2 Stonechats, and a long awaited for year tick, a Whinchat. 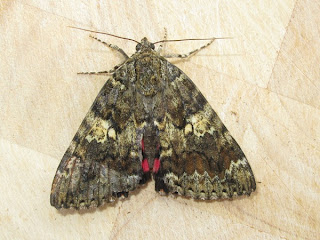 Dark Crimson Underwing - A rare migrant with less then 10 Dungeness records, trapped at Greatstone by the Mathematician the other day, and now in temporary residence `til Friday at the Kerton Road Cafe. 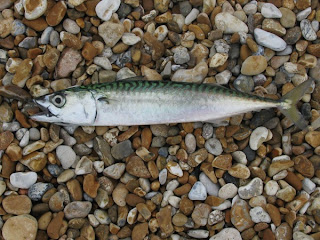 Mackerel - Lots about this summer with tons being landed along the coast. A beautiful looking fish which every creature from Gannets to humans finds very tasty (best done fresh and on the barby).
In other news, a Cattle Egret was reported from the bird reserve on 2nd and 4 Wood Sands and Curlew Sand were on ARC yesterday. The long staying GWEgret and Glaucous Gull remained at their established `homes`.
Dungeness Boats - 1615hrs With the rain band passing over and the wind easing, decided on a seawatch from the boats. For once I made the right call as it was terrific and reminded me (if I needed) what makes this such a brilliant place. Nothing particulary rare, just loads of seabirds, many really close, with the sun on them and a few more bits and pieces besides. Very difficult to gauge numbers as quite a bit doubled back following the shoals of fish. No skuas for an hour until Gullman arrived with his long tom... Gannet 200, Sandwich Tern 200, Common Tern 100, Black Tern 6, Little Tern 2, Arctic Tern 1, Kittiwake 20, Yellow-legged Gull 1, Common Scoter 19, Arctic Skua 6, Bonxie 1. Mammals: 1 Common Dolphin, 1 Grey Seal and 5 Harbour Porpoises. 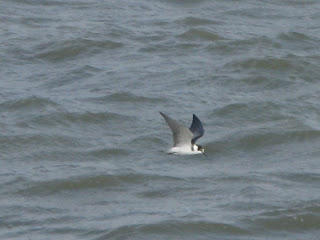