Lade - 0600hrs - cool, sunny, w1 - A stunning start to the day with blue skies, light airs and plenty of waders on the pits. The southern island held, 2 Dunlin, 1 Common Sand, 1 Ringed Plover and a juv Little Stint. In total across the site there were, 15 Common, 5 Green and 1 Wood Sandpipers, 6 Greenshanks and 15 Whimbrel overhead (cant decided which of the latter 2 has the most evocative call, probably the shank..). As the tide came in on the bay 150 odd Curlews flew to roost on the Desert, along with a few more Dunlins and Ringed Plovers. Masses of Black-headed Gulls (342 actually) on south lake and one female Tufted Duck had 17 ducklings in tow! No sign of yesterdays Black-necked Grebes or Garganey. 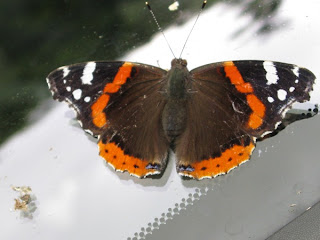 Red Admiral - On the car windscreen at ARC, kind of poignant as been chatting about butterflies in the hide..

ARC - 1600hrs - As the day progressed so the wind increased to a gusting 25mph. From Hanson a clear out of Lapwings and Goldies from yesterday. However, at least 10 Dunlins, 5 LRPs and 2 Common Sands. Also, 2 Little Gulls, 1 Black-necked Grebe and the long-staying Goosander. As things were a bit flat nattered on to Robin Reliant for a while about butterflies, in particular Graylings; remember them, they used to everywhere around the coastline 30 or 40 years ago, (Dunge, Cley, Minsmere etc.) now you never see them. Anyhow, he`d been over the border (Sussex) to photograph some at a downland site. Cracking butterfly, as I recall, cryptically camouflaged when at rest with its wings closed, hardly ever saw the upperwing when grounded tho. And whatever happened to the Wall butterfly? Used to be really into butterflies back in the 80`s, got pics of most of them on slides too (if you`re under 30, Google `transparency`!). Even went for that Mountain Ringlet thingy in the Lake District as I recall... Rambling on a bit now, so best sign off...
ps: the GWEgret and Glaucous Gull were both at their usual stations, while another Balearic was seen off the point this morning.
Posted by Paul Trodd at 01:06