Dungeness - 0615-0815hrs - cool, sunny, w3 - Decided on a seawatch this morning, for a change, which turned out to be a good decision, and was joined by a couple of other local optimists who carried on the counting. The first distraction was a flock of about 100 grounded Yellow Wagtails on the flat beach near the fishing boats, along with several Pied and one Grey Wagtail in their midst. A steady trickle of Sand Martins and a few Swallows added to the passerine interest.
At least 200 Gannets and a similar number of Common and Sandwich Terns were loitering offshore, fishing and loafing, along with a dozen Guillemots, a few Great Crested Grebes and a minimum of 6 Harbour Porpoises. Further out another trickle of terns headed purposefully west, also: 3 Fulmars, 3 Manx, 1 Balearic Shearwater, 10 Kitts, 1 Med Gull, 4 Arctic and 3 Little Terns and 15 Arctic Skuas. 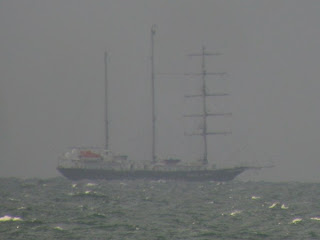 Lade - 1300hrs The only migrants over the pit were 10 Yellow Wags and a Green Sandpiper.
Posted by Paul Trodd at 06:59