Lade - 0600hrs - cool, sunny, nw3 - With only 15 moths of 5 species in the traps last night it was a case of lets go birding instead - and the local patch did not disappoint; in fact it was one of the best days of the year so far. The island at the south end had singles of LRP, Dunlin and Wood Sand (always a good start) followed by a juv Black Tern hawking nearby. There was millions of little white flies everywhere and the Black-headed Gulls and Sand Martins were soaring overhead snapping them up. A Marsh Harrier flipped over the bank, a Kestrel hovered over the Desert and a party of 10 Yellow Wags moved through. South lake was covered in wildfowl and gulls including 3 juv Shelduck, 5 families of Tufteds, 2 Wigeon, Shoveler, Teal, Gadwall and 2 new Black-necked Grebes in non-breeding plumage. The sallows held 10 Willow Warblers, Reed, Sedge and Cetti`s Warblers; but I couldnt find a single Whitethroat, so perhaps they`ve moved off. More waders followed on the islands with 5 Green Sands, 3 Common Sands, a Greenshank, plus Little Egrets and sleeping foxes. And then, to cap it all off a Garganey swam out in the open. I made it 61 species in little over an hour, pretty damm good I`d say. 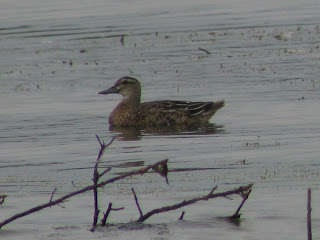 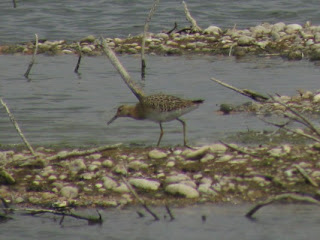 Ruff, ARC
Dungeness - 1630hrs News of further Balearic Shearwater sightings earlier on today prompted a brief visit but I could find no sign.
Posted by Paul Trodd at 11:01