Lade - 0600hrs - cool, dry, sunny, nw1 - Yellow Wagtails are a common migrant down here in August and the past few days has witnessed a near continuous passage of what is, nationally, a declining summer visitor. This morning was no different with small parties grounded on the storm beaches and others passing overhead. There appeared to be many juveniles within the groups suggesting a good breeding season up country or on the near Continent where flavissima also breeds. Many of these birds will be heading towards Iberia as a staging post to fatten up before crossing the Sahara. Yellow Wags are nowhere near as numerous on the Marsh during the spring as they take a more easterly route on their return migration.
Other migrants noted included several hundred Sand Martins, 10 Whitethroats, 5 Willow Warblers and several Sedge and Reed Warblers. Waders seem to have moved on, as not one was noted.
On the moth front numbers and variety remained low due to the cool nights, although Orange Swift was new for the season and a Silver Y the only migrant.
Great Dixter - A family visit to the gardens at Great Dixter yielded Buzzard overhead and Spotted Flycatcher in the walled garden. If you`ve not been, go sometime soon, as it is superb, especially on a warm summers day like today, the smells and scents were unbelievable. 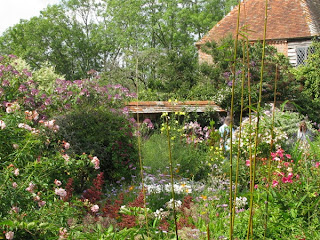