A Few Good Birds and Plenty of Laughs

Lade - 0600hrs - mild, rain, cloudy, sw3 - Nothing much in the trap last night apart from Spectacle and a pristine White-point.
1000hrs - A late start due to B&B guests, but decided to spend the day just mooching about locally. First stop the local patch, and with drizzle in the air hundreds of hirundines of all 3 species (mainly Sand Martins) over south lake plus 10 Swifts. Most of the waders seem to have shipped out with just 2 each of Green and Common Sandpipers and a lone Whimbrel calling in the murk. Seemed to be something of a fall of Sedge Warblers with at least 20 around the sallows, plus Reed and Willow Warblers and a single juv Cuckoo. Kestrel, Marsh Harrier and Sparrowhawk accounted for the raptors.
Dungeness - 1100hrs An hour and a half seawatch from the concrete road was both bird-rich and highly entertaining with the Joker on top form firing out quips based on the past weeks national news events (no prizes for guessing the general theme...). The laughs continued when Weekend Birder bowled up and regaled us (in graphic detail) with a botched prostate story - what a hoot, these old geezers crack me up with all their ailments... (what it is to be hale and hearty and in me 50`s...). Anyhow, yes, back to the birds, seabirds in particular. Was difficult to establish numbers as stuff was feeding and  kept getting blown back around the point, but in the vanguard were 300 Common and 100 Sandwich Terns, 200 Gannets, plus 10 Kits, 10 Little, 5 Black and 1 Arctic Terns, 1 Med Gull, 60 Common Scoters, 21 Dunlins, 1 Barwit, 50 Sand Martins 20 Swallows (not seabirds), 11 Arctic Skuas and 2 Bonxies. Turnstones were back on the beach and the Glaucous Gull was down by the boats. Also noted was the female member of the Ashford Three who`d had a couple of distant shearwaters earlier on.
ARC - 1245hrs - Joined Weekend Birder in Hanson where a good selection of waders was on offer: 15 Goldies, 20 Lapwings, 15 Dunlins, 5 LRPs, 2 RPs, 5 Knots, 4 Greenshanks, 2 Blackwits and single Common Sand and Little Stint. Also, 2 Little Gulls and all the usual wildfowl. A mixed passerine flock in the near sallows comprised mainly Willow Warblers, but also Chiffchaff, Whitethroat, Cetti`s, Sedge and Reed Warblers, Long-tailed Tits and Robin. At the south end 4 more Blackwits and the Goosander.
Scotney Pits - 1400hrs A terrific count of 1,115 Grey Lags on the grass by the pits plus, 280 Goldies, 2 Avocets, 1 Curlew Sandpiper, 26 Yellow Wagtails, 5 Mistle Thrushes, 150 Linnets, 1 Whinchat and 20 Goldfinches.
Galloways - 1500hrs - Singles of Whinchat, Stonechat and 2 each of Skylark, Mipit and Wheatears here plus at least 200 Linnets, 10 Reed Buntings and a Hobby. The Little Owl was in its usual spot on the chicken sheds alongside a pair of Stock Doves.
Springfield Bridge - 1600hrs -  GwEgret, Wood and Green Sandpipers and 2 Hobbies from the bridge.
Greatstone Beach 1645hrs A quick look at the beach from the Tavern revealed 2 Grey Plovers 25 Barwits, 10 Sanderlings, 50 Dunlin and hundreds of Oystercatchers, Curlews, Sandwich Terns and 6 Shelducks amongst about a thousand gulls.
Not a bad little jaunt and finished the day on 107 species, without really trying. 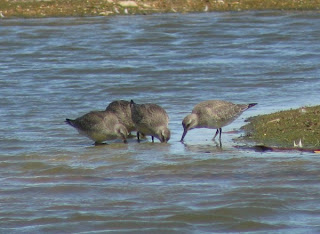 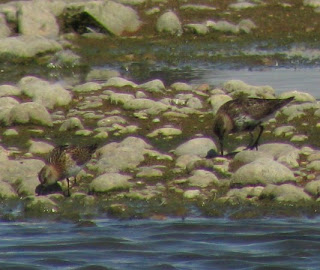 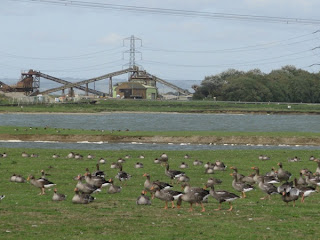 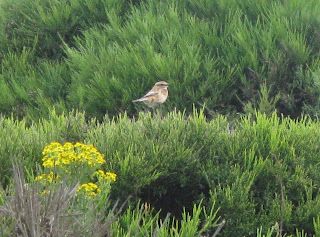