Lade to Dungeness and back - 1100hrs - warm, sunny, sw5 - Walked out to the point across the Desert this morning with Teacher-teacher. Despite the strong south-westerly keeping all the little `uns low several parties of Yellow Wagtails noted on the shingle ridges, plus 3 Wheatears and a few Sand Martins. In the Trapping Area came across a group of birders with a moth caterpillar which turned out to be a Buff-tip.
On the return leg along the beach from the Lifeboat Station to Lade two flocks of terns comprised 55 Sandwich, 80 Common, 25 Arctic (adults) and 2 Little Terns. Waders noted were 15 Ringed Plovers, 10 Dunlin and 15 Curlew. A few more Yellow Wagtails and Sand Martins pushing south along the beach into the gusty wind. 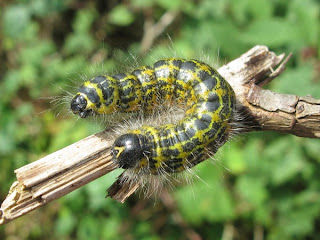 Buff-tip moth larvae, Trapping Area
Dungeness - 1730hrs An hour at the boats didnt produce much by recent standards. A steady flow of Gannets and Kitts west, plus around 100 Common and Sandwich Terns feeding offshore with one Black Tern. A juv Med Gull and Arctic Skua also noted. The usual number of Harbour Porpoises and the Grey Seal showed briefly.
Posted by Paul Trodd at 07:33