Lade - 0600hrs - warm, dry, sunny, n1 - A muggy night led to a good moth catch with 34 species. Nothing particularly rare but Cypress Pug was new for the season. On the pits plenty of wildfowl and a few waders on south lake including a Wigeon, 2 Greenshank, 2 Green and one Common Sandpiper. Also, Green and Greater peckers, 10 Willow Warblers and a Blackcap.
Rye Harbour - 1100hrs Plenty of Common and Sandwich Terns on flat beach due to the approaching high tide a long with 12 Golden Plover, 2 Greenshank, Wheatear and Yellow Wagtail. It appears that the terns have had a poor breeding season, due in part to predation by Kestrels and Med Gulls and the flooding of Ternery Pool. 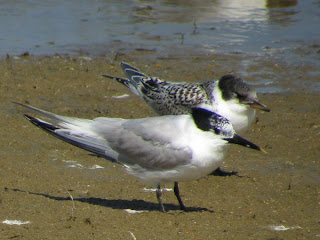 Sandwich Terns, Rye
Other local news included an Osprey that went down the coast around midday and a Dark Crimson Underwing at the Kerton Road Cafe. There was no report on yesterdays Temminck`s Stint from Hanson.
Posted by Paul Trodd at 09:13