An Old Lady and an Osprey

Lade - 0630hrs - mild, cloudy, ssw2 - "I had an Old Lady in the trap last night", (b-boom). It has been quiet down here of late on the moth front but a few more bits and pieces last night included Old Lady, a moth that I only get once or twice a year, and the delightfully named, Cream-bordered Green Pea. Locally, a few Jersey Tigers have hit the traps recently and a Scorched Carpet was at Greatstone.
Over the pits grounded migrants included 10 Yellow Wagtails, 2 Mipits, 5 Willow Warblers and a Wheatear. No sign of any migrant waders but over 100 Curlews drifted over from the bay to roost on the storm beaches. Also noted Green and Great Spotted Woodpeckers, 20 Sandwich Terns and a Marsh Harrier.
ARC 1000hrs - The now expected flock of 220 Goldies, 300 Lapwings, 30 Knots, 10 Dunlins, 2 Ruff and singles of Green, Wood and Common Sandpipers, Greenshank and LRP. A Sparrowhawk flapped over a couple of times flushing the waders, followed by an Osprey which flew over the lake putting everything up, including the ducks. It `hovered` a couple of times before crossing the causeway road and out of sight, heading steadily southwards. Whenever I see this magnificent raptor passing our way in autumn I wish them a silent good luck and hope they avoid the gunners that await them across the Channel, plus the many other man-made hazards, en-route to their winter quarters in western Africa.
Dungeness Boats - 1600hrs Joined Gullman and the Joker for a brief seawatch from the concrete road where several Balearic Shearwaters had been seen earlier in the day. A steady westward flow of terns (including 4 Black Terns) and Gannets, plus 3 Arctic Skuas. At least 10 Guillemots on the sea and 5 Harbour Porpoises. 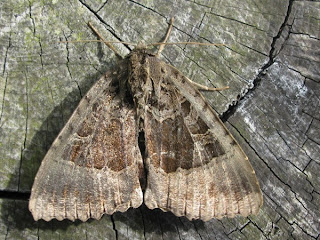 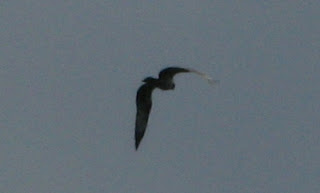 Osprey, ARC - Honest! Quite possibly the worst ever pic I`ve posted (I know, there`ve been a few!!)
Posted by Paul Trodd at 10:55