Lade - Lockdown Day 12 - mild, cloudy, light airs - Yet again I had trouble sleeping last night and got up several times to wander around the garden listening for any overhead scoter passage, but without success. By early doors I`d had enough and decided upon a one hour dawn chorus session in the back garden from 0530-0630hrs. It went something like this:
It was a mild start to the day with dampness in the air and a wet slick on the cat-slide slates and garden table due to the changing temperature overnight: at 0100hrs the sky was clear and cold and full of stars, but a bank of cloud and mist rolled in from the south before daybreak.
Herring Gulls never seem to sleep and it was no surprise that their `cackling` was the first avian noise of the day; mercifully, they seem not to be interested in nesting on our cottage roof this year (so far), although I`m sure some other poor soul hereabouts will have to put up with these brutes all summer. A distant Canada Goose was next, `honking` over towards Kerton Road pit, closely followed by a `kleeping` Oystercatcher and a Curlew, both waders regular flyovers here on the changing tide. Black-headed Gulls calling `kree-hah` were next, also drifting over from the pit where they sometimes nest.
After a five minute hiatus the first passerine broke into song, a Robin, closely followed by a rush of Blackbird, Wren, Dunnock and a `wheezing` Greenfinch in the fir trees. A Carrion Crow `cawed` somewhere overhead in the gloom as the local gang of House Sparrows `chirped` into life, along with several Starlings. Jackdaws always seem to be in a hurry, tearing hither and thither like a gang of street vandals, at least 50 must`ve flown over during the hour, in contrast to our local pair of breeding Magpies already looking for some poor unfortunate bird to mug.
And then, just after 0600hrs, a nugget of gold as a skein of Brent Geese cut across the peninsula and out over the bay, about 50 birds heading up-Channel to their Arctic breeding grounds no doubt. I`ve often seen Brents  `cutting the corner` in past springs when birding the Dungeness hinterland, but never before from the garden. That takes the Lade Lockdown List to 86 species.
Two Cormorants over were next, followed by a Pied Wagtail south, Woodpigeons and Collared Doves around the garden and finally, just before 0630hrs, a singing Chiffchaff in the neighbours bushes making 21 species for the hour. 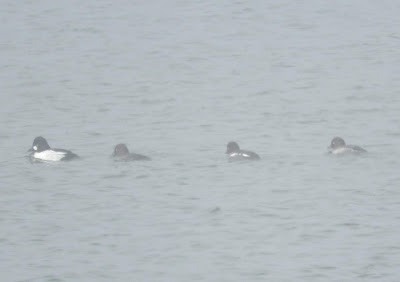 Goldeneyes in the mist, south lake 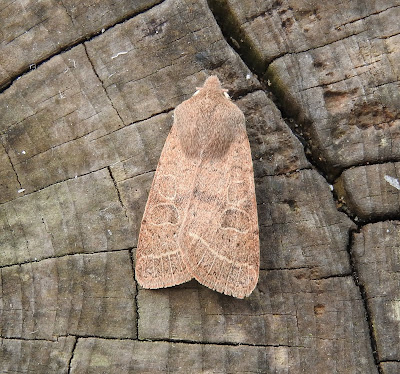 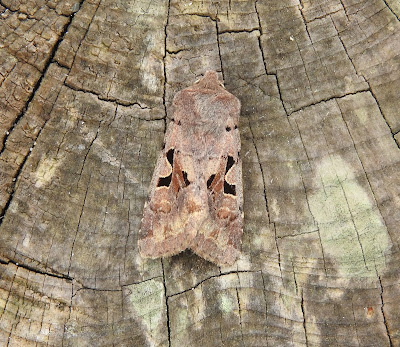 
Our morning walk around the local patch was plagued by a sea fret that rolled in and out until midday, forcing the Dungeness fog horn into action along with various ships crossing the bay. As a consequence little new was noted, and certainly no incoming migrants.
Back home a check of the moth trap revealed the first two species of 2020: Common Quaker and Hebrew Character. By early afternoon the temperature in the garden sun traps soared into the teens centigrade attracting many bees and other flying insects to the wallflowers and euphorbias. 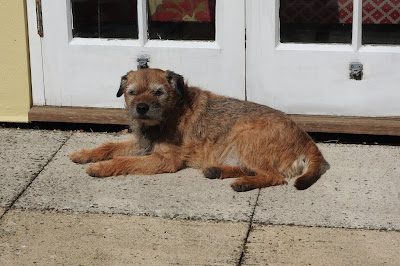 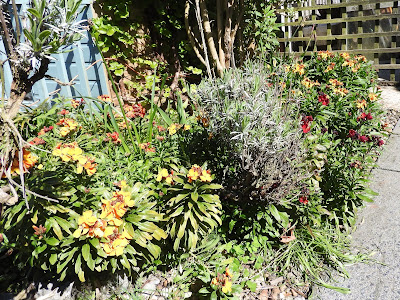 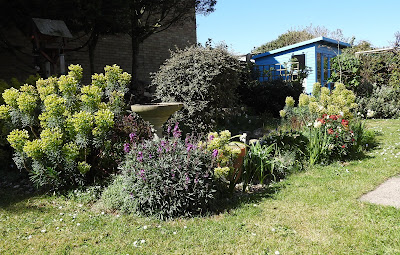 Garden flowers were alive with flying insects this afternoon
Posted by Paul Trodd at 10:30