Lade - Lockdown Day 26 - mild, dry, overcast, e2 - A welcome drop of rainfall overnight (10mm recorded at Littlestone by Owen L) had the desired effect on the morning circuit of the local patch with something of a species rush for the lockdown list. It was an odd day weather wise with mist first thing firing the Dungeness fog horn into life, followed by sunshine around noon and a cooler, cloudier evening.
However, before we`d even left the cottage I could hear the distinctive seven note whistle of the first Whimbrels (97) of spring passing along the coast. Throughout the morning at least 30 birds were seen or heard, including a flock of 12 that flew over Plovers whilst we were breakfasting in the garden just before midday! Two Redshanks (98) were new flying over the desert, where at least four Wheatears were grounded, two showing characteristics of the Greenland race, plus a few Skylarks, Stonechats, Meadow Pipits and Linnets. A Lesser Whitethroat (99) sang from Mockmill sewer along with Sedge Warblers and Common Whitethroats, while a singing Cuckoo (100) on the margins of south lake brought up the century of bird species on day 26. Pulses of Swallows and House Martins moved briskly through over the lakes and the first Greenshank (101) of spring announced its presence in flight over north lake. Singing Willow and Reed Warblers, Chiffchaff and Blackcap around the ponds, a hunting male Marsh Harrier and Mediterranean Gulls overhead rounded off a satisfying couple of hours birding. 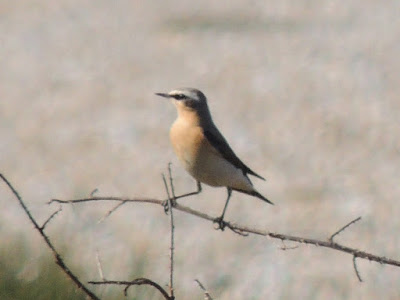