Lade - Lockdown Day 38 - cool, cloudy, sw 5 - These past couple of days has seen the departure of settled weather associated with a high pressure system off the continent for Atlantic, rain-bearing fronts rattling in off the ocean. Another dollop of rain went through last night followed by sunshine this morning and showers again this afternoon on a brisk, cool wind. Unsurprisingly there was another poor show of just 10 moths in the garden trap of four common species.
Typically, a few more Swifts and hirundines were forced down over the lakes, none of which tarried for long before heading inland. Across the site Cetti`s, Reed and Sedge Warblers, Blackcap, Chiffchaff, Common and Lesser Whitethroats are all holding territory, along with Cuckoo, Green Woodpecker, Stonechat, Linnet, Skylark and Meadow Pipit. On the bay today 50 Bar-tailed Godwits, 180 Sanderlings, 20 Ringed Plovers and five Whimbrels amongst the usual Curlews and Oystercatchers.
Well, that`s April done and dusted, and what a disappointment it has been with poor numbers of spring migrants all round apart from Common Whitethroats and Blackcaps, but judging from reports gleaned from Bird Observatory blogs it seems to be a pretty similar picture elsewhere.
To finish on a brighter note, the Black-necked Grebe below is a reminder of what one looks like, as they have been absent so far this spring from the local patch. 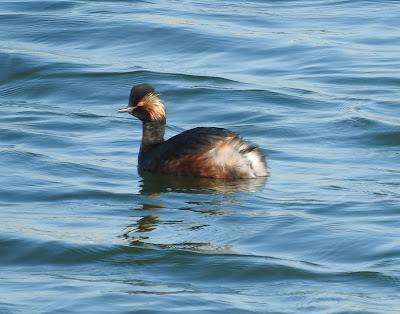