Lade - Lockdown Day 20 - warm, dry and sunny, light airs - Like millions of other work redundant folk across these islands, here at Plovers we`ve slipped into something of a `lockdown routine`, although we do try to vary it a bit to avoid the tedium. Generally I`m up just after sunrise and out in the garden checking for any overnight migrants in the bushes and sorting through the moth trap; not much to report on both fronts of late I`m afraid. I then spend an hour or so on the laptop writing up stuff for Birdwatching and the local paper etc, after which we head out on our `permitted exercise walk` around Lade with Barney in tow, sometimes cutting back along the beach depending upon the state of the tide.
Afterwards, an extended breakfast brings up midday, followed by a spot of `sky-watching` from the patio and then the inevitable chores around the cottage and garden. I`m doing jobs that have been put off for years, and taking ages over each one, as let`s face it, time is something that most of us have in spades at the moment; I made a five minute job of fixing a bolt on a gate the other day last for an hour, and when I told a mate of mine (who shall remain nameless!) he said, "you could get a job at the power station"!! I`ve also taken to reading in the summer house during the afternoon (currently The God Delusion by Richard Dawkins; highly recommended) and periodically wandering around the garden looking for insects. By late afternoon we usual tune into the Government briefing on telly and then don't watch anymore news as its just too depressing. This afternoon though we listened to the full two hours of Sounds of the 70`s on Radio 2 and what a cracking show it was for music lovers of a certain age group (anyone over 60!) If you missed it, catch up on BBC Sounds, so many great memories; and the track by The Jam, English Rose, was one I`d not heard for ages, superb lyrics.
After an evening meal I usually update the blog, check e-mails, listen to music and mooch about until the moth trap goes on at dusk. A bit of telly usually finishes off a typical day, but I`m not a great lover of the `idiots lantern`, although I`ve very much enjoyed the live streaming from the National Theatre of One man two guvnors and Jane Eyre, both still available on Youtube with more to come.
Once a week I venture out for food, as I`m also shopping for several elderly folk hereabouts, and on Friday for their fish n chips. The tension in supermarkets is palpable as people attempt to social distance from one another and I`ve already seen a couple of altercations; full marks to all the staff working in food stores in these strange times. It would appear that while the majority of the population are keeping to the governmental advice it would seem that exemptions seem to apply to a tiny minority, such as builders and fishermen (ignoring social distancing), kite-surfers, bait-diggers and land yachters (driving to site).
Its odd how suddenly overwhelming this lockdown can be, with me it tends to hit in waves, normally in the morning until I crack on with something that takes my mind off it. We`ve been talking to family and friends on the phone and social media more that usual, which helps, and when on our daily walks people seem to be more chatty (at a distance) which is great. We are lucky down here living by the seaside, and I`m certainly not complaining. The people I feel for are all those staff  working in care homes and front line NHS hospitals, heroes one and all. 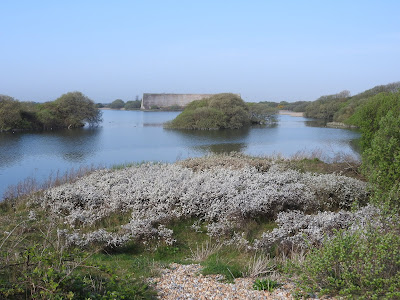 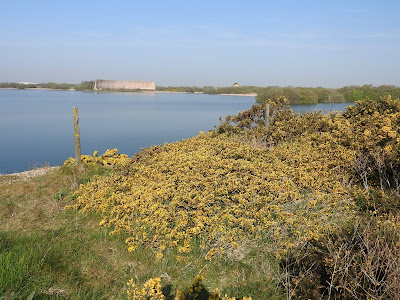 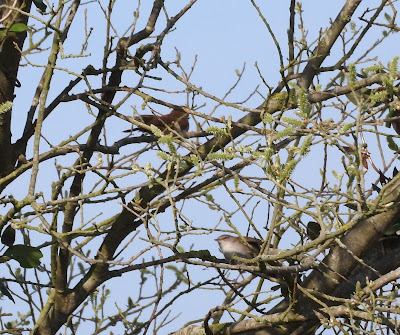 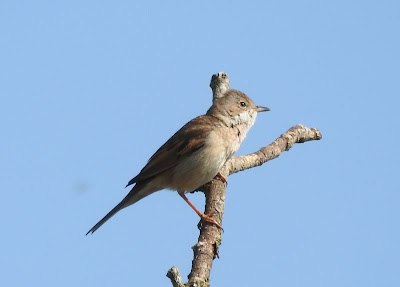 Whitethroat by the ponds 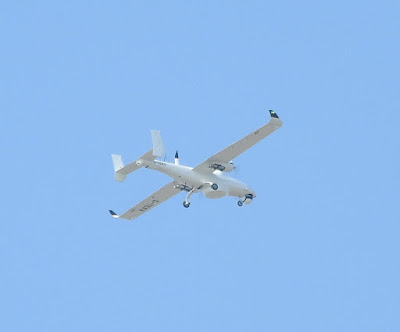 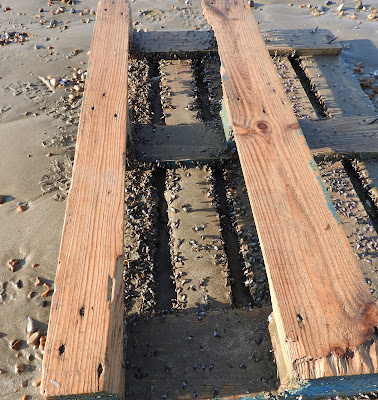 Anyhow, today was WeBS count and the following were logged across both lakes: Coot 56, Great Crested Grebe 24, Dabchick 12, Tufted Duck 48, Mallard 8, Teal 2, Mute Swan 3 and Gadwall 2.
Cetti`s Warblers were in fine voice this morning and two males on the causeway put on an amazing show as they `sang off` against one another only a few inches apart. This went one for a full five minutes atop a willow bush affording fantastic views.
Also, 25 Mediterranean Gulls over calling, a Green Woodpecker in the willow swamp, five singing Whitethroats, three Reed Warblers and two coasting Common Buzzards over the garden this afternoon. Butterfly highlight was the first Holly Blue of spring, also in the garden.
The drone was up again this morning flying in over the bay and eventually landing at Lydd airfield. I managed to get a few pics (see above) and noticed a registration number on the wing: G-TEKV, apparently being used by the UK Border Force to detect incoming human migrants. What with all the news centred on Covid 19, the same old crap is still going on elsewhere.
Posted by Paul Trodd at 11:46