Lade - Lockdown Day 25 - cold and cloudy, ne 4 - A nippy outing around the local patch this morning, due to a cold wind off the sea, was largely uneventful apart from a flock of 50 Swallows and House Martins over the willow swamp and another 20 at the top end of north lake. Two small groups of Mediterranean Gulls flew over and a drake Pochard had joined the Tufted Ducks on south lake along with a second pair of Teal. Five species of warbler sang around the site, but it was a half hearted affair due to the brisk wind.
The garden moth trap contained just two macros: Shuttle-shaped Dart and Double-striped Pug. 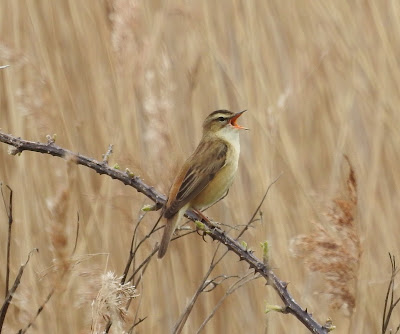 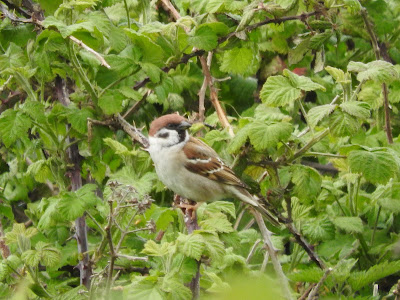 Looking back -
In a `normal` year in mid-April I would be out and about across the Dungeness peninsula searching for incoming migrants and showing our guests the birding delights on offer, but not so in this `lost spring of 2020`. A quick peek back a couple of years through the archives on this day revealed the following:
17th April 2019 - Dengemarsh - I spent the morning on the RSPB reserve with guests on Dengemarsh, my favourite area of the bird reserve with its wide open spaces. It`s where the shingle meets the farmland, along with a variety of managed habitats such as hayfields, lakes, reed beds, scrub and wet meadows, guaranteed to deliver a good range of "waders, warblers and waptors", as legendary Norfolk birder R A Richardson used to say in his faltering Norfolk burr when asked what were his favourite birds. In places Dengemarsh reminds me of a smaller version of the coastal wetlands at Cley and Salthouse where I spent many happy days in my formative birding years during the late 1960`s early 1970`s with partners in crime Kevin Downer and Graham (aka Mutley) Clarke.
However, I digress! Back to Dengemarsh, a year ago today, where the wetlands were alive with warblers; at least 50 singing Sedge, 10 Willow Warblers, plus a cacophony of Chiffchaff, Common and Lesser Whitethroats, Blackcap, Reed and Cetti`s Warblers, some that had probably dropped in overnight. Marsh Harriers and Buzzards seemed to be everywhere and two Cattle Egrets tracked the stock on the wet meadows where a small flock of migrant Whimbrels had grounded. Around Hooker`s reed bed Cuckoo, Bearded Tits and Tree Sparrows were noted, a Bittern `boomed`, while the ditches on Boulderwall fields held Great White and Little Egrets, Yellow Wagtails and Reed Buntings, as a steady passage of hirundines pressed inland. Redshanks and Lapwings displayed over the hayfields where a trio of Garganey, Greenshanks and Little Ringed Plover paused awhile. We logged over 60 species that morning, but the highlight for me was stunning views of a first Hobby of the year from the access road by the bee hives. 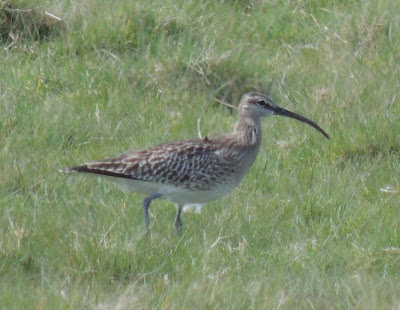 
17th April 2018 - Dungeness - 0600-0900hrs - Weather - cloudy, wind ssw 3 - The weather gods had forecast a southerly airflow overnight, although by the time I staggered into the seawatch hide, half asleep to join a clutch of local seawatchers already in pole position, it had swung just west of centre, but still favourable for a decent passage. It took a few minutes for the eyes to adjust to the gloom but already birds were on the move up-Channel with a steady passage of Gannets, Red-throated Divers, Brent Geese, Common Scoters, terns, auks and gulls. And then the first skua hove into view; a stunning adult, pale phase Arctic, and over the coming three hours followed by ten more, plus 25 Bonxies, many well inside the cardinal buoy.
In amongst the flocks of common sea duck were one or two gems in the form of a pair of Garganey, two Velvet Scoters, six Eiders and several Red-breasted Mergansers. The gulls were duly grilled delivering plenty of Mediterranean and a dozen Little Gulls, plus Sandwich, Common and Little Terns. Waders were on the move too with wavering flocks of Bar-tailed Godwits amid the seven-note flight calls of Whimbrels, plus Dunlin, Grey Plover, Knot and Avocet.
Perhaps most surprising of all that morning was the appearance of ten Manx Shearwaters going down-Channel, scarce seabirds this early at Dungeness. And just before I left the hide a splendid Black-throated Diver in full nuptial plumage graced us with its brief presence as it powered east, en-route to distant tundra breeding grounds.
Posted by Paul Trodd at 13:43