Lade - Lockdown Day 28 - cold, dry, sunny, ne 5 - Another bright sunny day but with a blasting wind off the sea making for a perishing cold daily outing around the local patch this morning. The last fortnight in April is the `business end` of spring migration and often loaded with possibilities in a normal year, whatever that may be! Unfortunately, with clear skies and an Arctic airflow for the foreseeable future the portents are not good for grounded migrants, which also makes the moth trap redundant; oh for some low cloud and bit of rain off the Atlantic!
However, despite the weather Whimbrels were on the move early on today with at least 15 heading up the coast uttering their wonderfully evocative calls into the biting wind. On the desert at least six Wheatears hugged the broom, darting here and there to fuel up on insects for the next leg on their northern journey. In the shelter of the ponds Cetti`s, Reed and Sedge Warblers, Common and Lesser Whitethroats were all in song. 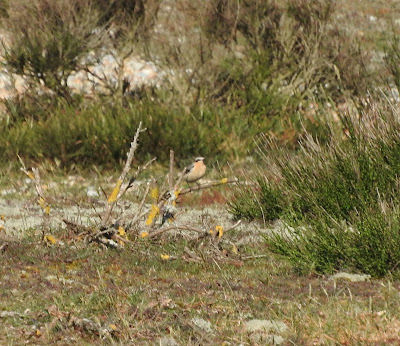 One of six grounded Wheatears on the desert
Posted by Paul Trodd at 11:49