Lade - Lockdown Day 33 - cold, dry and sunny, ne 4 - We must live in one of the coldest places in the country down here on the east facing coast, where yet another nippy old night delivered a poor return in the garden trap with just five moths coming to light.
Cloud cover until late morning promised a few birds during our morning walk out back and despite a brisk wind off the sea there were a few pulses of Swallows and House Martins moving over south lake, plus at least two Sand Martins, but none remained for long. Several Whimbrels went over calling as did a lone Greenshank and ten Mediterranean Gulls, while a single drake Shelduck was new by the willow swamp. The usual warblers were loath to sing due to the cold and a female Wheatear and two Stonechats were noted on the desert.
There was much activity from gangs of House Sparrows and Starlings on the shingle ridges as they foraged amongst the herb-rich turf for leatherjackets. Both species breed in good numbers along the coastal housing strip, so there was a constant two-way traffic of birds coming and going to nest sites with grubs. The local Jackdaws and Magpies were also getting in on the action.
On the bay sands 125 Sanderlings, 30 Ringed Plovers, 23 Bar-tailed Godwits and eight Turnstone were present. 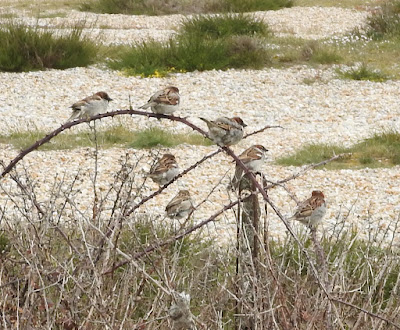