A day of chats and waders

Dungeness - 0730hrs - misty start, warm, dry sunny later, sw 2 - Spent the day guiding for Diana from London and Steve from California. We kicked off with a seawatch from the hide with the usual Gannets and Sandwich Terns drifting by, plus singles of Kittiwake, Common Scoter and our first Red-throated Diver of the autumn, an adult in breeding plumage. Moving onto the Patch where it was heaving with mainly Herring, Black-headed and Black-back Gulls, but in amongst the throng were two each of Yellow-legged and Mediterranean Gulls, 10 Common Terns and singles of Arctic and Black Terns.
Best of all though was along the wall and in the compound of A Plant where five Wheatears, two Black Redstarts, four Willow Warblers, a Whinchat, several Pied Wagtails and Linnets posed for the guests. The usual Kestrels were present around the old light, while opposite Jarman`s we noted at least 10 Wheatears and two Stonechats. 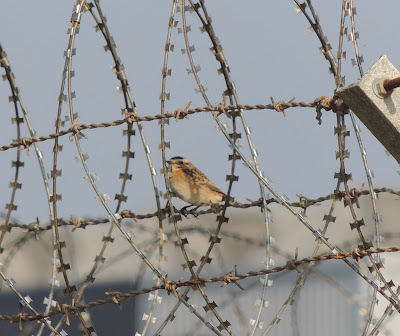 Whinchat amongst the razor wire, Dungeness

RSPB  - From the causeway road a Curlew Sandpiper showed well at the south end of ARC. A circuit of the bird reserve clocked up all the expected species so, two Great White Egrets, five Marsh Harriers, Hobby, Kestrel, Common Whitethroats, Reed and Willow Warblers, two Tree Sparrows, Common Sandpiper, two Wheatears and most surprisingly a flyover Wigeon (our first of the autumn) and a Barn Owl sat on the edge of a willow by the viewing ramp.
Scotney Pits - The two Spoonbills were on the pit to the east of the access road, which was handy, while the front field was smothered in hundreds of feral geese, including the Barnacles and Snow/Emperor types returned from their `northern` breeding grounds in, well, north Kent, I think...
Anyhow, moving onto `proper` birds a good selection of waders was on offer with 500 Golden Plovers and Lapwings providing the spectacle, plus 20 Blackwits, five Ruff and two Grey Plovers the quality. Also noted here, 10 Redshanks, 20 Curlews, Oystercatcher, Dunlin, Common Sandpiper and ten Yellow Wagtails down by the farm.

The Barnacles are back, Scotney

ARC - We finished off with hundreds of Lapwings, five Dunlins and a Little Stint from Hanson, plus all the usual eclipse ducks and a Peregrine that spooked the lot.
A terrific days birding around the peninsula, in great company, during which time we rattled up 82 species with the morning chats and afternoon waders the highlights for our guests.
Posted by Paul Trodd at 10:59