Lade - mild, cloudy, sw 2 - An overcast day with the threat of rain that never materialised. The past couple of nights have been uneventful in the Plovers moth trap, apart from a Webbs`s Wainscot which is just about annual here, although numbers remain in the low 20s of macro species. A couple of Willow Warblers fed in the garden first thing and a Greenshank went over calling. 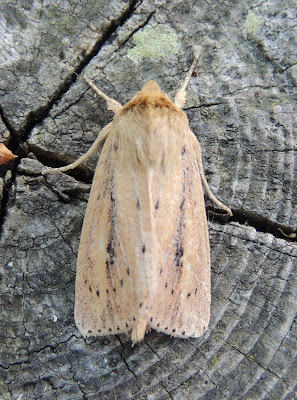 ARC - From Hanson hide the now expected large numbers of eclipse wildfowl, Lapwings, Coots and grebes, plus Wood Sandpiper, Blackwit and three each of Little Ringed Plover, Common Sandpiper and Dunlin. Plenty of Sand Martins over the water, several Willow Warblers in the scrub by Tower Pits and a Hobby overhead was about it.
Posted by Paul Trodd at 08:14