Lade - warm, dry and sunny, sw 2 - After spending yesterday in the field I decided on a quieter day checking the moths (that didn't take long...) and local patch where the highlight was the number of Common Blues on the wing: 52 to be precise, along the track beside south lake. 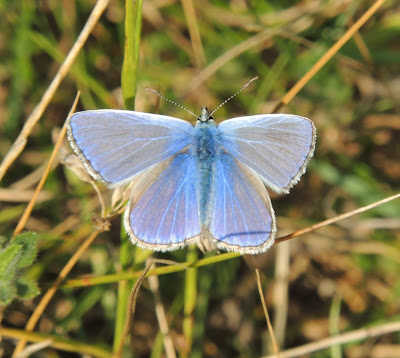 Returning home I stuck the phone on charge (where there`s dodgy reception) and headed for Mrs PT`s sewing hut in the garden and a session slapping on the paint and listening to the Test Match.
Sitting outside having lunch around 1330hrs I heard the Herring Gulls kicking off again (a Buzzard went along the coast earlier and got the full treatment) and expected to see a Grey Heron or another Buzzard, but almost fell over when the bird in attendance was none other than a Black Stork! Grabbing the bins I watched it drift out of sight towards Dungeness and then rushed in to retrieve the now fully charged phone to get the news out; only to find it was full of missed calls (thanks to one and all) tweets and texts!
Apparently the stork had been picked up over Hythe late morning and was then tracked down the coast to the point, across the RSPB reserve, over Galloways and back east where it was lost from view. PB managed to photograph it in flight, which was the kind of view I had, and no doubt will post a pic on his blog soon: www.ploddingbirder.blogspot.co.uk
Needless to say this is the rarest bird I`ve ever seen from Plovers and ranks way ahead of Bee-eater, Waxwing and Firecrest.
Posted by Paul Trodd at 10:47