Lade - 0700hrs - mild, cloudy, drizzle - Following a day off the Marsh yesterday it was good to walk the local patch this morning with my hairy mate, despite the murky weather conditions. The Curlew flock came off the bay with the incoming tide and eventually 288 went to roost on the Desert, plus four Barwits. At least five Common Sandpipers fed on the water weed on the margins of south lake, while hundreds of Sand Martins swarmed over the surface. 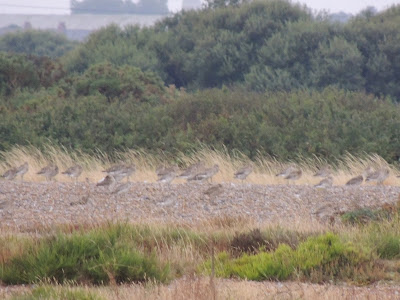 ARC - Called in at Hanson hide on the way back from Lydd mid-morning, expecting to see yesterdays Curlew Sandpiper, only to be surprised by a Temminck`s Stint, recently discovered by the locals, scurrying about amongst the Dunlins and LRPs. In recent times this tiny wader has become something of a rarity; the last one I saw locally was back in 2011, also on ARC. With their short legs, low slung body and precise feeding gait Temminck`s Stint are distinctive enough, but can easily be overlooked when creeping about on a shingle island. It was also handy having other small waders nearby such as Dunlin and Common Sandpiper, that looked gigantic in comparison. Also present were Wood and Green Sandpipers, two Ruff, Blackwit and loads of Lapwings, plus a Black Tern and several Yellow Wagtails. 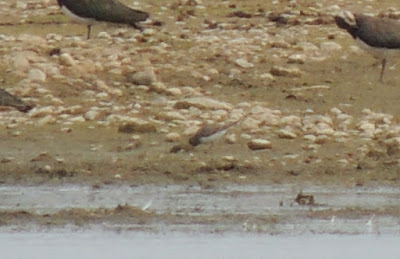 Screen hide - 1500hrs - Couldn't resist seconds on the stint this afternoon and watched it for 30 minutes from Screen hide feeding and bathing alongside three species of sandpipers, Dunlins, LRPs and ten Blackwits. Also a Garganey amongst the Gadwall and a Hobby over.
Posted by Paul Trodd at 12:00