Lade - am. muggy, cloudy, rain, ne 3 - Infact that doesn't even begin to describe the extreme weather of late morning as an incredible thunder and lightening storm hit the peninsula, followed by torrential rain so intense for about an hour that I thought the ground floor of the cottage was going to be flooded. Fortunately, only the porch and garage went under water, but I suspect many folk locally weren`t so lucky.
Greatstone Beach - By mid-afternoon the storm clouds passed and the sun broke through so we headed for the beach on an ebb tide with hardly any holidaymakers around and had a terrific hour of wader watching. The icing on the cake were two Curlew Sandpipers and a Little Stint, plus 25 Knots, 10 Grey Plovers, 300 Dunlins, 150 Sanderlings, 250 Curlews, 300 Oystercatchers, 10 Barwits, 10 Ringed Plovers and two Redshanks. Also present hundreds of Black-headed and Common Gulls, two Med Gulls, 100 Sandwich Terns and six Teal. 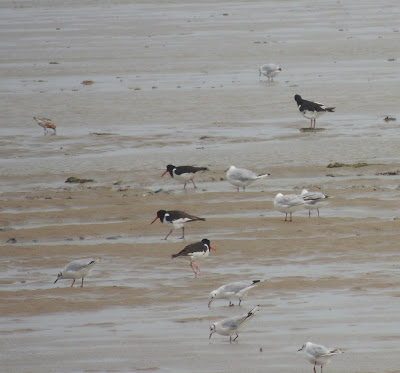 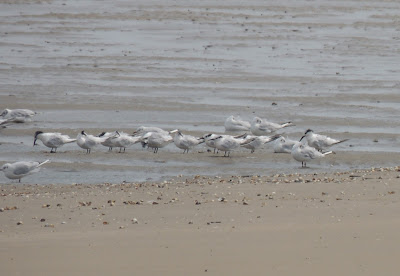 Dungeness - Called in at the boats and joined TG and PB on what was a pedestrian seawatch comprising a trickle of Gannets and Sandwich Terns. I attempted to visit Hanson hide but chickened out due to the flooded access road into the car park.
Posted by Paul Trodd at 08:50