An afternoon of waders

RSPB - showery, mild, n 2 - 1300hrs - A late start due to a change over day and a wet morning. Had to call in the visitor centre, where a few long-faced birders were still searching the car park scrub for this mornings Icterine Warbler, without success. Over the road the White-winged Tern had been joined by a second bird, while all the usual waders were around the site, including Goldies, Lapwings, Ruff, Snipe, Common and Wood Sandpipers. 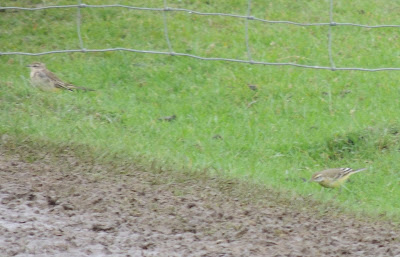 Scotney - The heavy rain earlier and overnight had certainly done the trick here with the front fields full of birds. Apart from the usual array of feral geese and ducks, around 100 Starlings, Linnets, Pied and Yellow Wagtails were busily feeding on the turf along with 100 Lapwings, 50 Curlews, 10 Dunlins, 10 Redshanks, 5 Snipe and 4 Ringed Plovers. At least 5 Common Sandpipers flitted around the margins then, just as we were leaving, a large flock of waders swept in from the west to feed comprising 25 Ruffs (of all shapes, sizes and plumages), 6 Knots and 3 Blackwits. 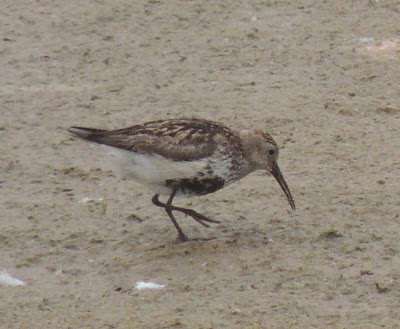 Greatstone Beach - 1530hrs - Perfect timing (more luck than judgement!), and with only a few holidaymakers around a large host of shorebirds had just arrived back on the sands as an ebb tide revealed food aplenty. This allowed a reasonably accurate count as follows: 630 Dunlins, 210 Sanderlings, 410 Oystercatchers, 260 Curlews, 35 Ringed Plovers, 25 Knots, 12 Barwits, 2 Grey Plovers and the first 6 Turnstones of the autumn. Amongst the hundreds of Common and Black-headed Gulls were 50 Sandwich, 10 Common and 2 Arctic Terns.
A tidy afternoon with 18 species of waders noted.
Posted by Paul Trodd at 11:35