Lade - warm, overcast, dry, sunny, e 2 - 0600hrs - Another muggy night delivered a host of moths in the Plovers mv, including three Bordered Straws, Archer`s Dart,White-point and Dark Sword-grass.
We scoured the local patch in what appeared to be good drift migrant conditions, and indeed a steady overhead passage of Yellow Wagtails was underway (c100 during two hours) and even a few Mipits and Linnets. At first glance the Desert seemed barren, but eventually yielded six Wheatears and two Whinchats, plus one party of 20 grounded Yellow Wagtails.
South lake was thick with hirundines, mainly Sand Martins and 50 Swifts, at first but on the return walk the lot had gone - they`d probably sensed the incoming rain and decided to head for France early. Around the margins two Common Sandpipers and a Snipe fed amongst the water weed.
The willow swamp was a little disappointing with just a few Reed Warblers and a single Sedge of note. 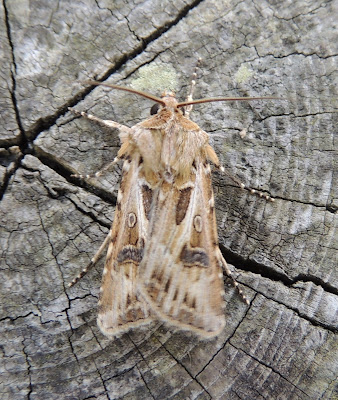 ARC - On the way back from the allotment a call into Hanson hide revealed the usual mob of Golden Plovers and Lapwings on the islands, plus six Ruffs, two Wood Sandpipers, three Snipe, five LRPs, Green Sandpiper, Little Stint and Spotted Redshank. Leaving the hide more Yellow Wagtails passed overhead and ten Swifts, just as the first spots of rain fell.
If the rainfall levels actually occur as forecast by the Met Office this coming week I doubt whether many of the wader-friendly islands will be above water come next weekend.
Lade - With the rain band quickly passing over this afternoon a recheck of the local patch revealed 100 Swifts over south lake, another 50 Yellow Wagtails overhead and a Pied Flycatcher in the willows beside the ponds.
Dungeness - After having a look at another Pied Flit in the lighthouse garden we joined TG at the fishing boats for an hour seawatching, which was notable for up to six Arctic Skuas tooing and froing chasing Sandwich Terns. Also, a trickle of Common Terns and Gannets, two Kittiwakes, a distant Balearic ( which I missed) and two pulses of Swifts out totalling 100 birds. More Yellow Wagtails were on the beach beside the concrete road and two Wheatears.
Posted by Paul Trodd at 10:39