Red-crested Pochards and a Black Tern

Lade - warm, dry and sunny, se 2 - The past couple of days on the local patch have been pretty similar with small numbers of Sedge and Willow Warblers, Common Whitethroats, Sand Martins, Swifts and Whimbrels passing through the site and overhead, while moth numbers have remained stubbornly low in the garden trap. 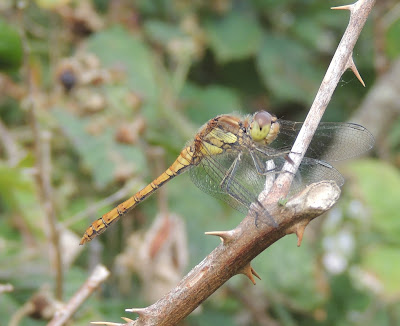 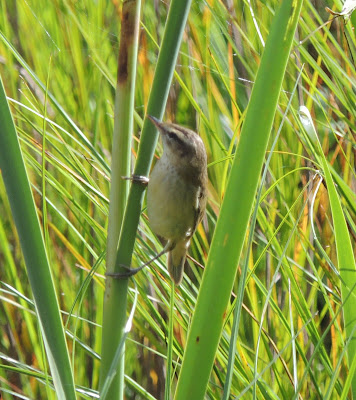 Dungeness  - At the point this morning a trickle of Gannets, Sandwich and Common Terns passed the buoy with two Yellow-legged Gulls at the Patch. Along the power station wall two family parties of Black Redstarts and Pied Wagtails, plus two Willow Warblers. The Peregrine family were active around the power plant sending the Feral Pigeons and gulls skywards. Opposite Jarman`s two brood of Wheatears, Mipit and Skylark noted.
ARC - A Wood Sandpiper showed well from Hanson hide along with Redshank, Greenshank, Common Sandpiper, Dunlin and five LRPs, while two distant Red-crested Pochards (eclipse drake and a female/juv) were our first of the autumn out on the lake amongst hundreds of common wildfowl. Walking along the track back to the car park at least two Clouded Yellows flew over along with several Painted Ladies and a couple of Willow Warblers in the bushes. From the causeway road a Great White Egret flew towards the reserve.
Lade - With only a breath of wind and an ebb tide it was the perfect evening for a walk along the beach to check for shorebirds. The bulk numbers comprised 1,000 Black-headed Gulls, 300 Common Gulls, 300 Oystercatchers, 230 Curlews, 100 Sandwich Terns, 50 Common Terns, 30 Dunlins, 10 Sanderlings, three Med Gulls and my first ever Black Tern on the sands amongst a flock of ten Common Terns.
Brilliant stuff, and all a mere 200 yards from the front door of Plovers! 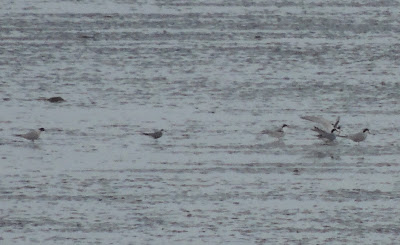 Rubbish shot, but Black Tern (second from left) was my first here


NB: Balearic and Sooty Shearwaters were reported off Dungeness this morning.
Posted by Paul Trodd at 12:07