Lade - Saturday - warm, dry and sunny, se 2 - 0800hrs - A fine morning with a trickle of Sand Martins and even one or two Yellow Wagtails south over the Desert. On south lake the only bird of note was a lone Snipe, the first of the autumn, that briefly landed on an island before flying off towards the bird reserve.
The garden attracted some cracking butterflies enjoying the warm sunshine and feeding on nectar-rich flowers, including a succession of Painted Ladies, a Comma and at least one Hummingbird Hawk-moth. 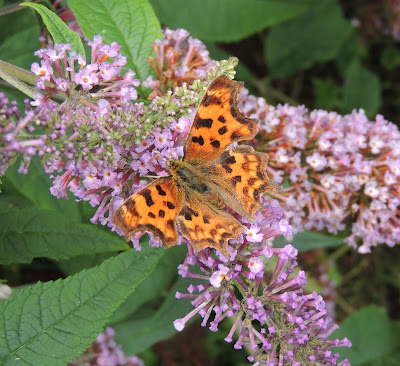 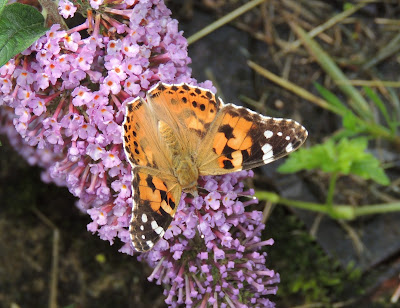 Dungeness - With an old pal of mine, Kevin Downer, paying us a visit for the weekend we headed out for an afternoons birding around the peninsula. First port of call was a seawatch from the fishing boats where nothing much was happening apart from a few distant terns, Gannets and Kittiwakes moving offshore, a close Grey Seal and a trickle of Sand Martins out.
Moving on to ARC pit the car park scrub held a decent array of passage warblers, mainly Common Whitethroats and Willow Warblers along with several Sedge Warblers and Lesser Whitethroats (what gems they are) and a Garden Warbler. Walking down to Screen hide a viz mig of Sand Martins and Yellow Wagtails was well underway with a flock of 12 of the latter briefly alighting on the sandy ridges. The Swallow fed young in the hide nest and out on the water and islands there was the usual array of ducks and Lapwings, four Little Egrets, another Snipe, a few Common Terns, Dunlins and Little Ringed Plovers, an Oystercatcher with two well-grown chicks and a couple of hunting Marsh Harriers.
From Hanson hide a couple of quality waders in Little Stint and Wood Sandpiper amongst 150 Lapwings, plus a Ruff, two Dunlins, three Little Ringed Plovers and a Blackwit. More common passage warblers were noted around the willow trail.
Finally, we joined the ladies on the beach at Lade where the sands held hundreds of gulls, Oystercatchers and Curlews, plus 20 Sandwich Terns and five Redshanks. It was a glorious evening to be slumped on the shingle looking out across the bay in warm sunshine, reminiscing about old times. We ended the day with a superb meal in the Everest Nepalese restaurant in Hythe. 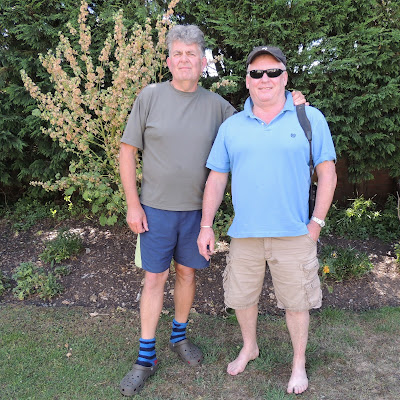 Sunday - warm, dry, sunny, se 2 - Lade - Another cracking summers day with a Poplar Hawk-moth the only noteworthy in the garden trap. A circuit of the local patch delivered a host of butterflies along the grass track by south lake and two Common Sandpipers around the margins. The bushes by the ponds and along north lake were full of passage Willow and Sedge Warblers and Common Whitethroats and the buddleias alive with Painted Ladies. Walking back along the beach on a flood tide 20 Sandwich Terns were fishing nosily just offshore.
We spent the afternoon chatting, whilst eating and drinking in the garden. Two silly old buggers nattering on about the old days, running wild in the countryside around Maple Cross in the Colne Valley on the edge of Chilterns, as a pair of snotty-nosed kids in the 1960s. Subjects covered included: fishing, egging, ratting, scrumping, spud planting, pet crows and magpies, tree camps, camping out at night, trout tickling, catapult fights with neighbouring village kids, falling out of trees, the merits of Jack Russell`s, French arrows, mushrooming, rabbiting, fish-spearing, picking water-cress, hand-milking cows, being chased by bulls and much, much, more.
Oh what an idyllic childhood, pass the rose-tinted spectacles someone...
Posted by Paul Trodd at 09:50