Lade - cool, cloudy, rain, se 2 - A decent batch of moths in the garden trap this morning included another Scarce Chocolate-tip and, new for the year, Yellow-barred Brindle. Very little happening over the pits, apart from a few Willow Warblers, but the bay was an altogether different proposition with over a thousand waders to sift through on a flood tide. At midday we wandered down to the Tavern where most of the little `uns were feeding and with the beach devoid of holidaymakers enjoyed a pleasant hour wader watching. A juvenile Little Stint was the pick of the bunch amongst hundreds of Sanderlings and Dunlins, while a flock of 30 Redshanks dropped, the highest number this month, plus small numbers of Knot, Ringed Plover and Grey Plover. 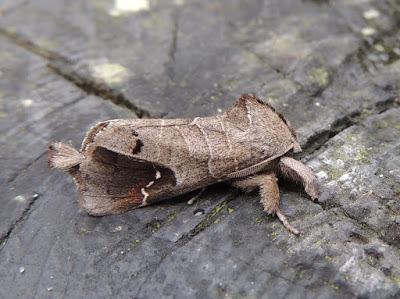 Dungeness - An hour at the fishing boats with PB this afternoon delivered little movement on the sea apart from a trickle of Gannets, Sandwich and Common Terns, plus two Arctics.
Greatstone Beach - Couldn`t resist another look at the beach on an ebb tide this evening with CP. If anything there was even more Dunlins and Sanderlings than this morning and up to 100 Ringed Plovers.
Walland Marsh - Despite the murky weather with a steady drizzle we pressed on to Walland where our first Marsh Harrier was the pale and distinctively marked adult male we saw on our last visit. Another five individuals came and went, but as we were watching them a stunning adult male Hen Harrier emerged from a pea field and flew around nice and close showing off its Bullfinch-like rump and grey plumage before drifting away; later we picked it up again, distantly, just before nightfall. Also in the area 100 Yellow Wagtails, 10 Reed Buntings, Linnets, Tree Sparrow, Kestrel, Reed Warbler and Bearded Tit.
On the way home we noted two Foxes on the lane and a Badger bounding around in a stubble field at a fair old lick.