Waders, terns and a smart moth

Dungeness - mild, cloudy, rain clearing, sw 2 - A mid-morning saunter down the point and a glance at the sea revealed a few Gannets offshore and a party of 12 Common and two Black Terns west; while the early morning seawatchers reported a decent passage of terns and waders, plus a couple of Arctic Skuas. Also, two Clouded Yellow butterflies, one along the power station wall and another in the moat.
Whilst chatting to PB news came through from DW of `very interesting` moth at the Obs - and what a cracker it was too, a pristine Bedstraw Hawk-moth, a rare migrant and new for the DBO trap site. 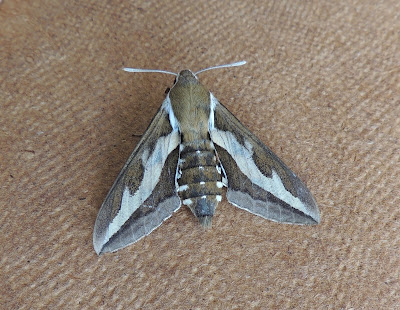 ARC - Another good show of waders from Hanson hide this afternoon with at least seven Wood Sandpipers the highlight, along with 200 Lapwings, 50 Golden Plovers, four Knot, three Blackwits, Ruff, Greenshank and Dunlin. Also two Garganey amongst the dabblers and two Red-crested Pochards within the diving ducks out on the lake. 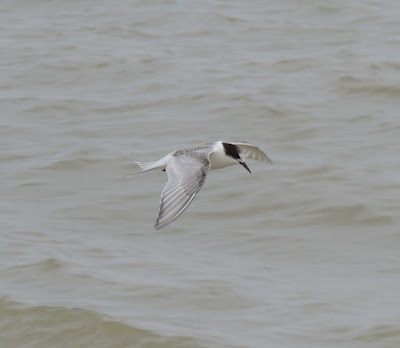 Dungeness  - Back at the fishing boats the regulars were just leaving, having not reported much apart from a small flock of terns feeding close to shore and a single Balearic in two hours. Anyhow, we decided to tough out an hour, during which time I attempted to photograph a juvenile Arctic Tern with the bridge camera; flight shots being a `challenge` with such a camera, but the terns were very close, diving down for sprats and eventually I got one acceptable shot. The obvious field mark that straight away picks out a juv Arctic from a Common in flight are the white secondaries and rump. On closer inspection the primaries are paler with a dark hind wing-bar, a thinner black carpal-bar, a paler underwing and a smaller, all dark bill. As always a smart bird, and I couldn`t help but wonder where on earth that little bundle of feathers will be by the end of the year...
Also, two Harbour Porpoises came in close, as did a Grey Seal, and just as we left a pulse of 150 Sand Martins headed out to sea, with many more coming down the beach as we drove off the estate.
Posted by Paul Trodd at 11:50