Lade - mild, cloudy, se 2 - We flogged around the local patch this morning without much success in what appeared to be perfect drift migrant weather conditions. However, several each of Willow Warbler and Common Whitethroat were noted around the willow swamp, along with a couple of hundred hirundines over south lake, mainly Sand Martins. Even Mockmill let us down with just a single Lesser Whitethroat of any note.
The Plovers moth trap held mostly Setaceous Hebrew Characters with the only quality insect being a worn Bordered Straw.
ARC - Having not been in Hanson hide for a few days I was not surprised, but a little dismayed, at how quickly the water level had risen, covering most of the smaller islands. However, 100 Golden Plovers and Lapwings were present, plus a Ruff, Dunlin, Whimbrel, Garganey and two flyover Ravens. Eventually, the juvenile White-winged Tern put in an appearance, amongst a flock of 7 Black Terns, and even briefly landed on an island for a spot of preening. 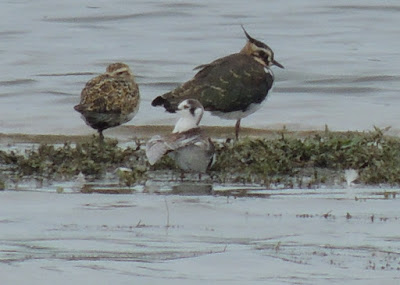 Dungeness - We finished off with an hour at the fishing boats this afternoon, along with a band of hardy locals. Apart from a few terns (including 2 Black Terns), Gannets, a Fulmar and two Balearic Shearwaters, that were closer to Cap-Griz-Nez than Dungeness ( I really must get a new `scope...) all was quiet. The highlight being a Herring Gull rescue from an anglers line, and the state-of-the-art Trinity House Vessel, Galatea steaming imperiously up-Channel, a magnificent sight. 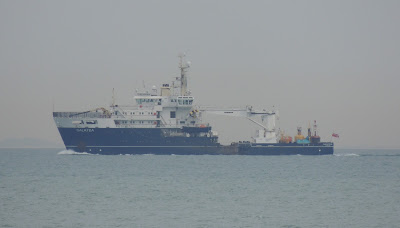